The five stages of grief model (or the Kübler-Ross model) is popularly known as a model that describes a series of emotions experienced by people who are grieving: denial, anger, bargaining, depression and acceptance. In actuality, the Kübler-Ross model was based on people who are dying rather than grieving. Although commonly referenced in popular culture, studies have not empirically demonstrated the existence of these stages, and the model has been considered by some to be outdated and unhelpful in explaining the grieving process.

The model was introduced by Swiss-American psychiatrist Elisabeth Kübler-Ross in her 1969 book On Death and Dying, and was inspired by her work with terminally ill patients. Motivated by the lack of instruction in medical schools on the subject of death and dying, Kübler-Ross examined death and those faced with it at the University of Chicago’s medical school. Kübler-Ross’s project evolved into a series of seminars which, along with patient interviews and previous research, became the foundation for her book. Although Kübler-Ross is commonly credited with creating stage models, earlier bereavement theorists and clinicians such as Erich Lindemann, Collin Murray Parkes, and John Bowlby used similar models of stages of phases as early as the 1940s.

In her book, Kübler-Ross states that the medical advancements of the time were the mark of change for the way people perceive and experience death. Due to this, pediatricians have been seeing fewer life-threatening ailments for their patients compared to one-hundred years ago.

Kübler-Ross later noted that the stages are not a linear and predictable progression and that she regretted writing them in a way that was misunderstood. “Kübler-Ross originally saw these stages as reflecting how people cope with illness and dying,” observed grief researcher Kenneth J. Doka, “not as reflections of how people grieve.”

As of 2019, On Death and Dying has been translated into forty-one languages with the 50th anniversary edition being published by Simon & Schuster. 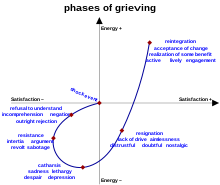 Kübler-Ross originally developed stages to describe the process patients with terminal illness go through as they come to terms with their own deaths; it was later applied to grieving friends and family as well, who seemed to undergo a similar process. The stages, popularly known by the acronym DABDA, include:

In a book co-authored with David Kessler and published posthumously, Kübler-Ross expanded her model to include any form of personal loss, such as the death of a loved one, the loss of a job or income, major rejection, the end of a relationship or divorce, drug addiction, incarceration, the onset of a disease or an infertility diagnosis, and even minor losses, such as a loss of insurance coverage. Kessler has also proposed “Meaning” as a sixth stage of grief.

In 2020, during the COVID-19 pandemic, Kessler applied the five stages to responses to the virus, saying: “It’s not a map but it provides some scaffolding for this unknown world.”

“There’s denial, which we saw a lot of early on: This virus won’t affect us. There’s anger: You’re making me stay home and taking away my activities. There’s bargaining: Okay, if I social distance for two weeks everything will be better, right? There’s sadness: I don’t know when this will end. And finally there’s acceptance. This is happening; I have to figure out how to proceed.
Acceptance, as you might imagine, is where the power lies. We find control in acceptance. I can wash my hands. I can keep a safe distance. I can learn how to work virtually.”

Criticisms of this five-stage model of grief center mainly on a lack of empirical research and empirical evidence supporting the stages as described by Kübler-Ross and, to the contrary, empirical support for other modes of the expression of grief. Moreover, Kübler-Ross’ model is the product of a particular culture at a particular time and might not be applicable to people of other cultures. These points have been made by many experts, including Robert J. Kastenbaum (1932–2013) who was a recognized expert in gerontology, aging, and death. In his writings, Kastenbaum raised the following points:

A widely cited 2003 study of bereaved individuals conducted by Maciejewski and colleagues at Yale University obtained some findings consistent with a five-stage hypothesis but others inconsistent with it. Several letters were also published in the same journal criticizing this research and arguing against the stage idea. It was pointed out, for example, that instead of “acceptance” being the final stage of grieving, the data actually showed it was the most frequently endorsed item at the first and every other time point measured; that cultural and geographical bias within the sample population was not controlled for; and that out of the total number of participants originally recruited for the study, nearly 40% were excluded from the analysis who did not fit the stage model. In subsequent work, Prigerson & Maciejewski focused on acceptance (emotional and cognitive) and backed away from stages, writing that their earlier results “might more accurately be described as ‘states’ of grief.”

George Bonanno, Professor of Clinical Psychology at Columbia University, in his book The Other Side of Sadness: What the New Science of Bereavement Tells Us About Life After a Loss, summarizes peer-reviewed research based on thousands of subjects over two decades and concludes that a natural psychological resilience is a principal component of grief and that there are no stages of grief to pass. Bonanno’s work has also demonstrated that absence of grief or trauma symptoms is a healthy outcome.

Among social scientists, another criticism is a lack of theoretical underpinning. Because the stages arose from anecdotes and not underlying theoretical principles it contains conceptual confusion. For example, some stages represent emotions while others represent cognitive processes. Also, there is no rationale for arbitrary dividing lines between states. On the other hand, there are other theoretically based, scientific perspectives that better represent the course of grief and bereavement such as: trajectories approach, cognitive stress theory, meaning-making approach, psychosocial transition model, two-track model, dual process model, and the task model.

Misapplication can be harmful if it leads bereaved persons to feel that they are not coping appropriately or it can result in ineffective support by members of their social network and/or health care professionals. The stages were originally meant to be descriptive but over time became prescriptive. Some caregivers dealt with clients who were distressed that they did not experience the stages in “the right order” or failed to experience one or more of the stages of grief.

Criticism and lack of support in peer-reviewed research or objective clinical observation by some practitioners in the field has led to the labels of myth and fallacy in the notion that there are stages of grief. Nevertheless, the model’s use has persisted in popular news and entertainment media.

Video about Your Text Described Five Stages In The Grieving Process. Which Of The Following Was Not Among Them?

7 Stages of Grieving a Breakup, Explained by a Breakup Coach

Question about Your Text Described Five Stages In The Grieving Process. Which Of The Following Was Not Among Them?

If you have any questions about Your Text Described Five Stages In The Grieving Process. Which Of The Following Was Not Among Them?, please let us know, all your questions or suggestions will help us improve in the following articles!

Search keywords Your Text Described Five Stages In The Grieving Process. Which Of The Following Was Not Among Them?

HEALING MEDITATIONS FOR YOUR BREAKUP: https://youtube.com/playlist?list=PLUyUDQP-GbZHWXrcLr_xkaT7b06v5M77u