Stele signage at the corner of Galleria Boulevard and Roseville Parkway, a major intersection adjacent to the mall. 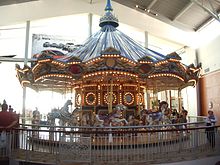 Former carousel located inside the mall, removed in 2020.

On July 25, 1995, the construction of an enclosed shopping center in two phases within the city of Roseville, to be developed by Urban Retail Properties, Inc., was approved. Sears became the first anchor tenant to commit to the property, with Nordstrom following suit in April 1998. A modification to the project, allowing for a single phase of construction and additional anchor space, was approved in June 1998, making way for Macy’s to commit to the property the following month. JCPenney committed in September 1998, filling the mall’s planned anchor space in time for its September 2 groundbreaking. The Galleria at Roseville opened for business on August 25, 2000 with 120 stores and the Promenade, an outdoor wing of shops and restaurants anchored by a Crate & Barrel store, considered novel at the time.

In 2004, Westfield announced plans to expand the four year-old Galleria. After several changes, the expansion consisting of 400,000 square feet of new and reconfigured retail space, a new Dining Terrace, and 40,000 square-foot additions to both JCPenney and Macy’s was approved. A portion of the outdoor Promenade area and the property’s original food court were demolished and Crate & Barrel was relocated to accommodate the project. The expansion was completed in 2009 at a final cost of $270 million, bringing the property to 1.3 million square feet and turning the Galleria into the region’s largest shopping center. 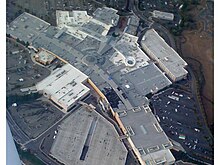 On October 21, 2010, 23-year old Alexander Piggee entered the property’s GameStop store with a large backpack, claiming to have a weapon and that his “sister had been kidnapped by aliens.” Piggee barricaded himself in the store and set fire to the merchandise as employees fled. The mall was evacuated as authorities tried to locate Piggee, arresting him as he attempted to flee the scene. The mall’s fire sprinkler system was manually shut off due to a miscommunication, allowing the fire to grow and eventually engulf much of the mall’s north end as firefighters from surrounding cities were called in.

Most of the mall’s north wing between Macy’s and Sears was destroyed and the roof of the wing partially collapsed, with total damages estimated at $55 million. Then-Governor Arnold Schwarzenegger declared a state of emergency in Placer County the day after the fire, with mall officials and city representatives vowing to have the property partially reopened by the upcoming Christmas shopping season. Unaffected portions of the property began reopening in phases less than two weeks later.

The damaged north wing was rebuilt over the following year, while a renovation was undertaken elsewhere in the mall adding new flooring, lighting, signage, and architectural details to match the rebuilt wing. The north wing reopened to the public on October 6, 2011.

Alexander Piggee subsequently pleaded guilty to setting the fire, and Federal Judge John Mendez sentenced Piggee to 15 years, after which he will be on probation for 6 years. Both defense and prosecution attorneys had requested a sentence of 10 years, but Mendez issued a substantially longer sentence, calling Piggee a threat to public safety.

In 2015, Sears Holdings spun off 235 of its properties, including the Sears at Westfield Galleria at Roseville, into Seritage Growth Properties.

On April 17, 2018, Sears announced it would close its Roseville store. A Cinemark movie theater and a Round 1 entertainment center took over much of the former Sears building and opened in late 2021 and mid-2022 respectively.

If you have any questions about Westfield Galleria At Roseville 1151 Galleria Blvd Roseville Ca 95678, please let us know, all your questions or suggestions will help us improve in the following articles!