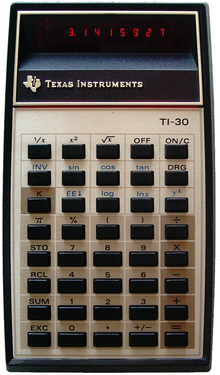 The TI-30 is a scientific calculator manufactured by Texas Instruments, the first model of which was introduced in 1976. While the original TI-30 was discontinued in 1983 after several design revisions, TI maintains the TI-30 designation as a branding for its low and mid-range scientific calculators.

The original TI-30, a cost-reduced but functionally equivalent version of TI’s SR-40 unit, utilized an LED display, is powered by a 9-volt battery, and contained nearly all of its functionality in one chip, where previous calculators used many discrete components. The TI-30 could perform nearly all the logarithmic and trigonometric functions of an HP-21, its primary competition at the time. Although the Texas Instruments SR-50 pioneered algebraic notation with operation precedence in 1974, the TI-30 made those features available at a more affordable price.

Early production TI-30 units (c. 1976) contained a logic error in their calculation of inverse tangents. On these early models, pressing “0 INV TAN” would cause the calculator to go into an infinite loop until it is powered off with the OFF button. The “0” had to be pressed on the keyboard; the calculator produced a correct answer if the “0” was the result of a previous calculation.

The TI-30 was at one point the most popular scientific calculator for junior high and high school use in the United States. For $24.95, the purchaser received both the calculator and a 224-page book, The Great International Math on Keys Book, which covered basics in algebra, business and finance, trigonometry, probability and statistics, physics and chemistry, and had ideas for games and puzzles that could be played with the calculator.

In 1980, Texas Instruments converted the TI-30 to use a liquid crystal display, releasing the TI-30 LCD in Europe and the TI-30 II a year later in the U.S. The calculator itself remained functionally similar over several redesigns in the following few years, with solar power coming to the line in 1982 in a joint venture with Toshiba. The “X” in all current TI-30 models refers to the addition of a 10+2 display (that is, a 10 digit mantissa plus a 2-digit exponent) in 1993; with the addition of a 2-line display and a D-pad in the XIIS/XIIB in 1999, the TI-30 line split in 2, with the TI-30Xa becoming TI’s overall entry-level scientific, and the enhanced XII designs offering more input flexibility to the user. The MultiView models, introduced in 2006 and 2007, replace the 2-line display with a dot matrix display similar to a graphing calculator, and move many of the functions traditionally placed on or next to individual calculator keys off onto menus very similar to those used on the popular TI-83 calculator line.

At one time or another, most models in the line since the introduction of the LCD models have been available in both solar powered and battery versions; the Xa retains solar power only on models sold in a few markets in Europe, while the XIIS and XS MultiView models run off both solar and battery power depending on available ambient light. The earliest model, however, uses a 9 volt battery, which is expected to last for approximately 20 hours of use, according to the Owner’s Manual. However, two rechargeable kits were offered, the RK-1 and the RK-2, which each contained a battery allowing for two hours and four hours of continuous use, respectively, before needing to be recharged. 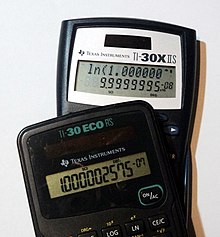 Demonstration of the so-called “logarithm bug” that exists in some TI-30 models. In both cases, the value of ln(1.0000001) was calculated. The TI-30 Eco RS shows the incorrect answer, but the TI-30X shows the correct answer.