The Payment Card Interchange Fee and Merchant Discount Antitrust Litigation is a class action lawsuit that was filed in the United States District Court for the Eastern District of New York in 2005. The lawsuit alleges that the major credit card networks, Visa, MasterCard, and American Express, conspired to fix the interchange fees that merchants must pay to accept credit cards. The suit also claims that the card networks illegally restrained competition in the market for merchant discount services. The plaintiffs are merchants who accepted credit cards, and the defendants are Visa, MasterCard, and American Express. The case is currently in the discovery phase, and the plaintiffs are seeking damages for the alleged anti-competitive behavior.

The payment card interchange fee and merchant discount antitrust litigation is a United States class-action lawsuit filed in 2005 by merchants and trade associations against Visa, Mastercard, and numerous financial institutions that issue payment cards. The suit was filed due to price fixing and other allegedly anti-competitive trade practices in the credit card industry. A proposed settlement received preliminary approval from the judge overseeing the case in November 2012 but the majority of named class plaintiffs have objected and many have vowed to opt out of the settlement.

In December 2013, U.S. District Court Judge John Gleeson approved a settlement in the case that amounted to $7.25 billion. The settlement lowers interchange fees for merchants and also protects credit card companies from being sued over the issue again in the future. That settlement was reversed. Currently one for US$6.24 billion is scheduled to go before the district court on November 7, 2019. 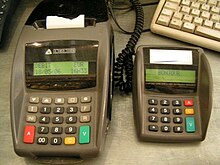 Terminals for swiping credit cards, and origin of the term “swipe fee”

Plaintiffs allege that Visa, Mastercard, and other major credit card issuers engaged in a conspiracy to fix interchange fees, also known as swipe fees, that are charged to merchants for the privilege of accepting payment cards, at artificially high levels. In their complaint, the plaintiffs also alleged that the defendants unfairly interfere with merchants from encouraging customers to use less expensive forms of payment such as lower-cost cards, cash and checks.

On 27 November 2012, United States District Judge John Gleeson entered an order granting preliminary approval to a proposed settlement. Speaking of the settlement Gleeson said, “I don’t mean to suggest for a moment that there are not a number of issues that are going to require significant scrutiny. I’m not persuaded that the deficiencies are the obvious deficiencies that ought to derail preliminary approval.” Gleeson’s approval was important because it allows the potential seven million or more members of the class to begin the process of opting in or out of the settlement.

The settlement provides for the cash equivalent of a 10 basis-point reduction (0.1 percent) of swipe fees charged to merchants for a period of eight months. This eight-month period would probably begin in the middle of 2013. The total value of the settlement will be about $7.25 billion. This amount could be decreased based on the number of plaintiffs who opt-out.

A part of the settlement that allows merchants to charge fees to customers paying via credit card in order to recoup swipe fees took effect on 27 January 2013. Debit cards and transactions in the ten states that prohibit credit-card surcharges will not be affected. Many large retailers, such as Wal-Mart and Target have opted not to impose surcharges. In the event of a return, surcharges are refunded along with the purchase price of the merchandise. The National Association of Convenience Stores, also known as the NACS, complained that this measure “merely make[s] retailers the collection agents for the banks.” The National Retail Federation said, “that card company fees are the problem and the surcharge story is a volume that belongs on the fiction aisles. The real threat to retailers and their customers continues to be price-fixed hidden fees that can only be cured by transparency and competition.”

Opponents object to provisions that would bar future lawsuits and even prevent merchants from opting out of significant portions of the proposed settlement. Stephen Neuwirth, a lawyer representing Home Depot, said, “It’s so obvious Visa and MasterCard were prepared to make a large payment because of the scope of the releases being given. It’s all one quid pro quo and merchants like the Home Depot are being denied the chance to opt out of that quid pro quo and say this is a bad deal.”

According to court filings, Target, Wal-Mart, Home Depot, Neiman Marcus, Saks, and 1,200 other plaintiffs oppose the settlement. A group of large merchants including Kroger, Walgreens, and Safeway have reached a separate agreement with the defendants over swipe fees. The NACS, for example, harshly criticised the settlement and is urging its members to opt out. Tom Robinson, chairman of NACS and president of Robinson Oil, said, “This proposed settlement allows the card companies to continue to dictate the prices banks charge and the rules that constrain the market including for emerging payment methods, particularly mobile payments. Consumers and merchants ultimately will pay more as a result of this agreement — without any relief in sight.” Josh Floum, general counsel for Visa, responded, “Our belief that the agreement will eventually receive final approval was strengthened today. As we have said from the beginning, this settlement is a fair and reasonable compromise for all parties.”

Class members can opt out of the monetary part of the settlement in addition to objecting in court. Visa, MasterCard, and issuing banks can scuttle the settlement if merchants that account for 25 percent or more of credit card spending in the United States since 1 January 2004 to the approval of the settlement.

The Retail Industry Leaders Association (RILA), whose members include many prominent retailers such as Best Buy and Wal-Mart, opted out of the proposed settlement and urged its members to do the same. Deborah White, a senior RILA official, said, “RILA and the overwhelming majority of our members agree that the proposed class action settlement is a bad deal for retailers.” RILA members are legally required to opt out on their own.

Prior to this settlement, merchants won a major victory against payment processors and card issuers with the passage of the Dodd-Frank financial reform bill. Dodd-Frank required the Federal Reserve to write rules for swipe fees on debit card purchases. Richard Durbin, the senator from Illinois who was the main proponent of those rules, has called the proposed settlement on credit card swipe fees, “gives Visa and MasterCard free rein to carry on their anti-competitive swipe-fee system with no real constraints and no legal accountability. This is not a settlement I would agree to. I hope that the remaining merchant plaintiffs will review the proposed settlement carefully and think hard about whether it will be good for the future of our credit- and debit-card systems.” Barney Frank, a representative from Massachusetts and a primary supporter of legislation to repeal rules on debit card swipe fees said he supports the settlement and stated, “A free-market approach in this area will be better for the economy and all concerned parties.”

Immediately after the preliminary approval of the settlement by Judge Gleeson in November 2012 a group of plaintiffs appealed to have it invalidated. The plaintiffs argued that the settlement violated their rights by not allowing them to opt out of some provisions. The inability to opt out of litigation releases that bar future suits was an important point of contention. Jeff Shinder, a lawyer for the plaintiffs said, “The proposed settlement violates the due process rights of millions of merchants by denying them the ability to opt out of the injunction, and this fundamental issue of law should be addressed now before notice goes out to merchants.”

In January 2013, the United States Court of Appeals for the Second Circuit ruled that any appeals against the settlement that received preliminary approval in November 2012 would not be heard until objections to the settlement are filed and considered by the trial court in September 2013. The practical effect of this ruling was to allow settlement notices to be sent to eligible merchants.

In June 2016, the United States Court of Appeals for the Second Circuit overturned the settlement on the ground that class counsel could not adequately represent merchants who has a significant interest in the monetary relief provided by the settlement and merchants who could only benefit from the prospective injunctive relief.

In April 2013, the three law firms appointed to lead the plaintiffs in this case asked for $720 million in fees. If approved this would be one of the largest awards of legal fees in American history. They argued that such high fees were reasonable given the amount of the settlement and the risks and complexity of the case. This dollar amount represents about 4.5 times what would normally be billed at an hourly rate for the work performed. Approval of these fees partially depends upon approval of the settlement. The law firms in question are Robins, Kaplan, Miller & Ciresi; Berger Montague; and Robbins Geller Rudman & Dowd LLP. Any fees awarded will be split among about 40 different law firms. The distribution of fees is normally decided by lead counsel.

Judge Gleeson retained Alan Sykes as an independent expert in order to help the judge evaluate the proposed settlement. Gleeson said he appointed Sykes would “advise the court with respect to any economic issue that may arise in connection” with final approval of the settlement. Gleeson mentioned appointing an independent expert during the hearing on preliminary approval in November 2012. He informed the parties in March 2013 that he was considering Sykes, a professor at New York University’s law school. According to a resume published by the court, Sykes previously taught at Stanford and the University of Chicago and has published several books and scholarly articles on economics and trade. No party objected to the appointment of Sykes. While parties routinely make use of experts to support their positions, judges rarely exercise this option.

This case is formally known as In re Payment Card Interchange Fee and Merchant Discount Antitrust Litigation. The docket number is 05-md-01720. The United States District Court in the Eastern District of New York in Brooklyn is the venue.

The case is more commonly known as Swipe-opoly, in reference to the alleged Visa and Mastercard duopoly over the payments network. Other variations include the Swipeopoly Settlement and the Swipe Fee Scandal.

If you have any questions about Payment Card Interchange Fee And Merchant Discount Antitrust Litigation, please let us know, all your questions or suggestions will help us improve in the following articles!