The Jersey Shore University Medical Center (JSUMC) Emergency Room is located in Neptune, New Jersey. The Emergency Room provides 24-hour emergency care for acute illnesses and injuries. It is equipped with a full-service laboratory, advanced imaging technology, and a dedicated team of board-certified emergency physicians, nurses, and technicians. The Emergency Room also offers a wide range of specialty services, including trauma care, stroke care, and cardiac care. The JSUMC Emergency Room is a Level II Trauma Center, which means it is prepared to provide the highest level of trauma care available.

Jersey Shore University Medical Center (JSUMC) is a 691-bed non-profit, tertiary research and academic medical center located in Neptune Township, New Jersey, servicing coastal New Jersey and the Central Jersey area. JSUMC is the region’s only university-level academic medical center. The hospital is part of the Hackensack Meridian Health Health System and is the system’s second largest hospital. JSUMC is affiliated with the Robert Wood Johnson Medical School of Rutgers University, and Hackensack Meridian School of Medicine at Seton Hall University. JSUMC is also an ACS designated level II trauma center with a rooftop helipad handling medevac patients. Attached to the medical center is the K. Hovnanian Children’s Hospital that treats infants, children, adolescents, and young adults up to the age of 21. JSUMC is listed as a major teaching and tertiary care hospital and has a staff of 127 interns and residents. It is a member of the Council of Teaching Hospitals and Health Systems.

Panorama of 2009 expansion to the hospital. (Northwest Pavilion)

In 2009, the hospital expanded to include a 5 story tower with patient care units and an emergency department with 10 pediatric beds, cardiology units, and pediatric units. The expansion added 103 beds to the hospital and organized patient rooms into “neighborhoods”[clarification needed] to ease patient anxiety. The design is recognized as an example of great hospital design.

In 2019, the hospital once again expanded by building the 10 story, 300,000 square foot Healing Outpatient Experience (HOPE Tower) at a cost of $265 million. The HOPE Tower includes outpatient cancer care, maternity, pediatrics, doctors offices and high-tech academic and research space. As a part of the expansion, the HOPE tower includes a 200 seat auditorium named the John K. Lloyd Amphitheater after the former co-CEO of Hackensack Meridian Health.

In March 2020, JSUMC implemented strict visitation protocols to help reduce the spread of the 2020 COVID-19 pandemic. In April 2020 the hospital drew criticism when they fired a nurse after the nurse voiced concerns over the lack of protective equipment (PPE) available to staff. A month later more employees came forward to criticize the hospital’s PPE actions in the matter.

In early 2021, JSUMC opened a new cardiac catheterization lab as part of the first stage of a $45 million cardiovascular expansion scheduled to be completed in July 2023. In 2003, the hospital performed 636 cardiac operations, the 5th most in the New York-New Jersey region according to a New York Times heart study. 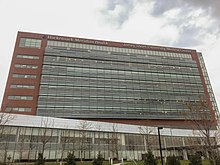 In 2020, the hospital was ranked #39 nationally in orthopedics by U.S. News & World Report. Also in 2020, the hospital received a bronze performance achievement award from the American College of Cardiology, one of 35 hospitals nationwide to receive the award. In Fall 2020, Jersey Shore University Medical Center was given a “B” grade by patient safety organization “The Leapfrog Group.” In 2020 it ranked in the top 10% in CDC‘s Maternity Practices in Infant Nutrition and Care (mPINC) survey of national hospitals.

In 2021 it was given a grade A by the Leapfrog patient safety organization.

The K. Hovnanian Children’s Hospital at Jersey Shore University Medical Center is a pediatric acute care hospital located in Neptune Township, New Jersey. The hospital has 88 beds and provides comprehensive pediatric specialties and sub-specialties to infants, children, teens, and young adults aged 0–21 throughout Coastal New Jersey. It is affiliated with both the Hackensack Meridian School of Medicine at Seton Hall University and Robert Wood Johnson Medical School, and is a member of Hackensack Meridian Health. K. Hovnanian Children’s Hospital features the only pediatric trauma center in the region, and 1 of 3 in the state.

The hospital was shown in a few episodes of The Learning Channels‘ highly rated reality program, “Trauma: Life in the E.R.”

If you have any questions about Hackensack Meridian Health Jersey Shore University Medical Center Emergency Room, please let us know, all your questions or suggestions will help us improve in the following articles!