The Herbert Irving Pavilion at Columbia University Irving Medical Center is a modern medical center located in New York City. The Pavilion is home to a variety of medical services and specialties, including emergency care, critical care, and surgery. The building features modern amenities and a bright, open design that enhances the patient experience. The Pavilion’s exterior features a glass façade, which allows for plenty of natural light to enter the facility. Inside, patients and visitors will find a variety of amenities, including a cafeteria, chapel, and retail shops. The Pavilion is also home to a state-of-the-art imaging center, which provides advanced diagnostic services.

CUIMC was built in the 1920s on the site of Hilltop Park, the one-time home stadium of the New York Yankees. The land was donated by Edward Harkness, who also donated most of the financing for the original buildings. Built specifically to house a medical school and Presbyterian Hospital, it was the first academic medical center in the world. Formerly known as the Columbia-Presbyterian Medical Center (CPMC), the name change followed the 1997 formation of NewYork-Presbyterian Hospital, a merger of two medical centers each affiliated with an Ivy League university: Columbia-Presbyterian with Columbia University, and New York Hospital-Cornell Medical Center, with Cornell University‘s Weill Cornell Medical College.

The Medical and Graduate Education Building was designed by architects Diller Scofidio + Renfro and Gensler and the structural engineer was Leslie E. Robertson Associates.

In September 2016, the campus was renamed for one of the hospital and the university’s largest benefactors, Herbert and Florence Irving. Herbert Irving is a co-founder and former vice-chairman of Sysco.

The hospital completed the first successful heart transplant in a child, the first use of the anti-seizure medication, dilantin, to treat epilepsy, and the isolation of the first known odour receptors in the nose.

It supported discoveries related to how memory is stored in the brain, and Nobel Prize-winning developments in cardiac catheterization (1956) and cryo-electron microscopy (2017). 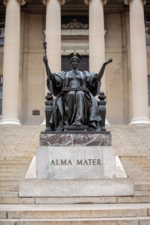 If you have any questions about Columbia University Irving Medical Center/Herbert Irving Pavilion Photos, please let us know, all your questions or suggestions will help us improve in the following articles!